Brushes at the ready…this month marks the prestigious national final of the Crown Trade Apprentice Decorator of the Year competition. 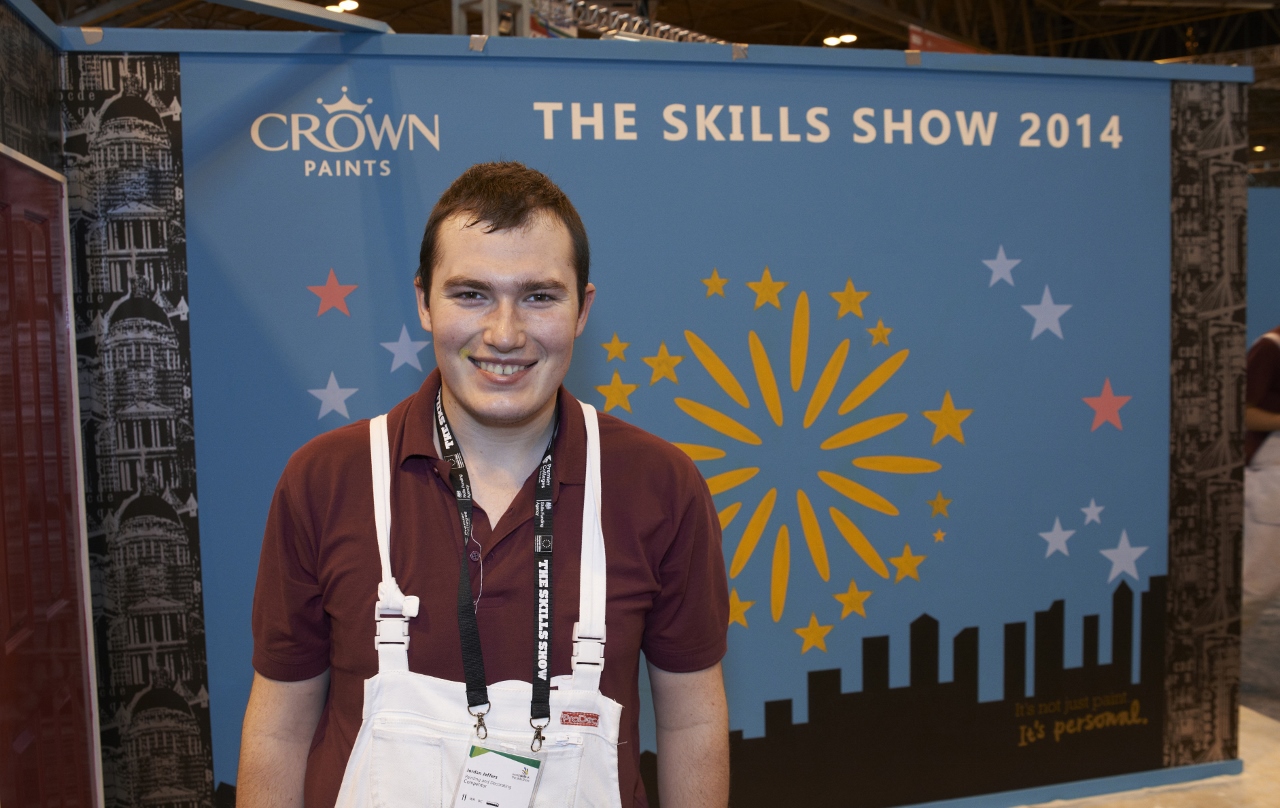 the stage at The Skills Show, at Birmingham’s National Exhibition Centre, from November 19 to 21.

The apprentices, selected from heats held around the UK, have spent months training for the contest, hoping they may catch the eye of WorldSkills Team UK judges.

The judges use the show to scout for talent for the next skills Olympics event which is due to be held in Abu Dhabi in 2017.

And they would be following in the footsteps of Crown Trade Apprentice Decorator of the Year success story Curtis Baker who began his journey as a competitor and rose through the ranks to take the national top spot representing his country in Sao Paulo earlier this year.

The competition is a cornerstone of Crown Paints’ commitment to encouraging the next generation to embrace vocational skills as a great career route.

But there’s more than glory at stake when the apprentices showcase their expertise to compete for the national title – with a £1,000 first prize, £500 for second place and £250 for third.

The Skills Show is the UK’s most influential skills, training and careers extravaganza. It showcases 50+ trades-based competitions where the ‘best of the best’ compete in their chosen skill area in an arena which attracted over 70,000 visitors last year.

Heats were held at colleges across the country earlier this year and competitors were challenged to create a complex rugby ball stencil design, in honour of the 2015 Rugby World Cup, in just 5 ½ hours.

The regional winners who will compete for the Crown Trade title are:

Product Trainer at Crown Paints and Apprentice Decorator of the Year Competition Manager, Kevin O’Donnell said: “This year’s project really tested the apprentices’ skills, time management and ability to work under pressure in front of an audience.  It was challenging but really did showcase the excellent skills of those who were successful.”

“The finalists will need all their powers of concentration for the next level of competition at The Skills Show.  For apprentices at the start of their career, the pressure will be immense, but they have already shown the potential to perform at the highest level in their trade.

“They will be in the spotlight for three days, undertaking an even more complex project which must be completed in 19 hours.  WorldSkills scouts will be watching their performances and, of course, thousands of visitors will also be looking on to add to the pressured environment.

Crown Paints Marketing Manager Debbie Orr added: “As a business we understand the importance of investing in and developing the next generation of industry professionals, which is why Crown Paints has been a proud sponsor of the Crown Trade Apprentice Decorator of the Year competition for over 36 years.

“The competition touches the lives of hundreds of apprentices and trainees at the start of their careers, encourages them to strive for excellence in their craft and reach the very highest professional standards.

“This is a great chance for competitors to show their tutors and employers, along with a panel of expert judges, just how well they’ve mastered the skills and techniques required. In addition, for Crown Paints it’s an opportunity to encourage talent and pride in the trade for the next generation of painting and decorating professionals.”

For further information on Crown Paints’ commitment to training visit https://www.crowntrade.co.uk/skills-training/ .  For more details of the Crown Trade Apprentice Decorator of the Year competition and The Skills Show visit https://www.findafuture.org.uk/the-skills-show.