A WORLD-FIRST in the development of pioneering low-energy firing technology, based on “Field Enhanced Sintering” is now a huge step closer after engineers and scientists working on the project made a significant breakthrough.

International materials technology company Lucideon secured a seven figure Regional Growth Fund award to develop technology capable of radically reducing energy use in the ceramics industry – one of the UK’s most energy-intensive sectors.

Now the technology has 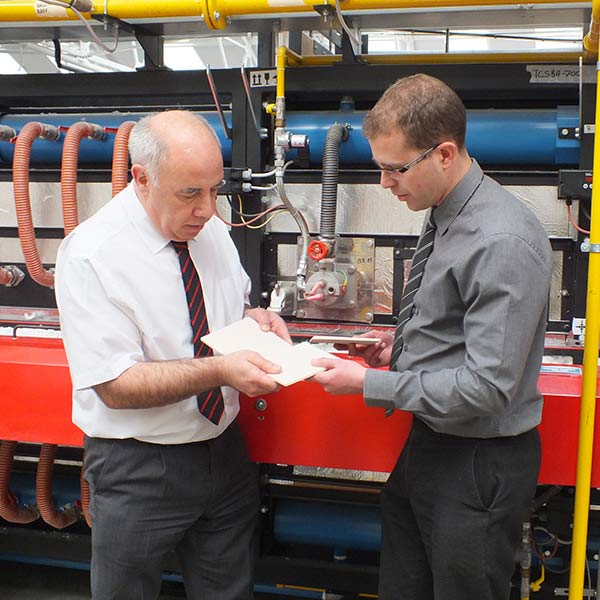 its first commercial result: 15 x 15cm tiles have been produced – all showing the same strength as tiles made using traditional, energy-intensive methods.

Business Secretary Vince Cable said: “This exciting innovation has the potential to slash energy bills and speed up production times right across the UK ceramics industry, creating hundreds of jobs at home and opportunities with new global markets abroad.

“I am pleased the Regional Growth Fund has played an important part in supporting the Lucideon team to develop this energy-reducing firing technology from design to delivery.”

Tony Kinsella, Chief Executive of Lucideon, said: “We now have material that is a tile, and looks like a tile, feels like a tile, rings like a tile and that’s a Eureka moment.

“There is still a lot of work needed but the team has risen to all of the challenges so far.

“Like all scientific and engineering endeavours, the project has had its ups and downs and some slices of luck.

“However, the team has never lost sight of the goal and, as confidence has grown, they have increased their levels of innovative thinking and application.

“As a result, we are confident we have a real success on our hands, which will have a profound impact on energy use and the economy of the ceramics industry in the future.”

Lucideon was awarded £1.9 million from the Government’s Regional Growth Fund in 2012 to take the innovation forward, due to the project’s potential to deliver game-changing technology to the factory floors of ceramics manufacturers across the UK.

The technology reduces the temperature needed to fire from 1150oC to 850oC (and as low as 600oC) and can cut fuel bills by a quarter or more – a significant figure in an industry where energy costs can reach millions of pounds a year.

It also can cut the time needed to fire ceramics from around 45 minutes to as little as 10 minutes – a process that not only slashes energy bills but also enables production to move towards more bespoke, shorter runs.

Stephen Dixon, Chief Executive of Johnson Tiles, said: “We have been working with Lucideon since the start of this project and we can now see real, measurable financial benefits in adopting the technology when it’s ready. It is a disruptive technology that could give us a real commercial advantage, not just in cost savings.

“We are constantly competing against overseas industries where energy, a huge part of our costs, is not as heavily taxed.  The technology that Lucideon is developing may more than level the playing field.”

Lucideon plans to have the low energy firing technology ready for commercial applications by the end of 2016 – and has secured the use of a full tile manufacturing line for 12 months to help them achieve that goal.

Dr David Pearmain, of Lucideon, is leading the low-energy firing project from the company’s Stoke-on-Trent headquarters. He said: “The tiles have been produced in fractions of the normal firing time and at very significantly reduced temperatures.

“Johnson Tiles has been hugely supportive of this project and has supplied us with most of the unfired material to date, along with expert technical support and advice.

“They’ve recently been in to see for themselves the tiles being fired in the development facility and are as excited as we are about the potential and impact of this technology.

“This is a hugely significant step in the technology’s journey to mainstream application in the ceramics industry and is the culmination of 18 months of development work and experimentation.”