A CHESTERFIELD man has been elected national president of a leading trade body.

Stuart Yates, from Brimington, stepped up for his one-year term of office with the Painting and Decorating Association (PDA) at the AGM and national conference held in Leicestershire this week.

The PDA, celebrating its 122nd anniversary this year, is Britain’s largest trade organisation dedicated to the painting and decorating industry.

Mr Yates, who owns the local business Stuart Yates Décor, said: “I’m extremely proud to be elected president and am looking forward to representing the association – it’s going to be an experience.

“I’ve been a member for many years and very much intend to make the most of the position.

“I started my apprenticeship back in 1976 with Mather and Harrison in Derbyshire when Wilf Harrison became national president.

“He was the one who encouraged me to become a member of the PDA and I’ve wanted this position ever since, so it’s great to be able to finally get there 40 years on.”

During his term in office, Mr Yates is particularly keen to encourage up and coming tradespeople.

He added: “The Painting and Decorating Association is very keen to see more young painters and decorators join the ranks and that’s a subject that’s close to my heart.

“Apprentices represent the future of the body and we should do everything we can to encourage them.

“We must ensure the PDA continues to move forward as a strong and robust organisation long after the present generation has moved on. 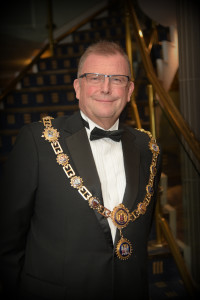